How A 5 Year-Old Started A Viral Trend

Jason Zhu may not know it but he has started a trend and it’s going viral in Sydney Grammar. During a zoom lesson with his Prep Class teacher, Jason surprised the class by suggesting to perform Mozart’s Eine Kleine Nachtmusik.  His performance got everyone excited and now the entire class wants to perform as well.

Jason is 5 years old.  He started learning music at Top Kidz Academy a year ago.   While his teacher and classmates may have been surprised by his bravado, Jason was mentored to be confident in front of a crowd. His teachers at Top Kidz Academy (Vaucluse & Chatswood) have been guiding him for almost a year. The  Zoom dial-up success that afternoon demonstrates the right motivation and guidance can go a long way in building a confident child.

Children are bundles of energy. They can’t sit still for very long. When Jason started piano lessons a year ago, he was just like any other 4-year old. Talkative, playful and distracted. But music training requires concentration to grasp concepts and commitment to practice to be able to play an instrument. How do you instil this in a classroom full of four and five years olds?

The great German composer Carl Orff once said children do not like to study but they like playing and using play as a learning tool can be an effective way to teach children music. The team at Top Kidz Academy appears to have found the best way to encourage active engagement in their students. That’s because many of the techniques used in the music school are grounded in famous music teaching methods like Dalcroze, Orff, Kodály, and Suzuki. This holistic approach to teaching music to young children combines instruments, singing, movement, and speech to develop children’s innate musical abilities.

Jason performing to his class on Zoom speaks volumes for the success of Top Kidz’s music programme. One of the reasons for his newfound confidence and focus could be the school’s tradition of running concerts.

Performing in a concert is the way this remarkable music academy celebrates its students’ accomplishments. At Top Kidz, there is no such thing as deferring performance until a child is ‘ready’. Instead, a child who has learned to play a piece of music- however simple – is encouraged to perform the piece in the academy’s concerts. The aim of this is to encourage every child to have fun in a ‘concert’ environment.

The team at Top Kidz Music Academy goes through extraordinary lengths to simulate a concert experience in the tradition of some of the finest European music festivals. Weeks into a concert, there is an air of excitement in the Academy.  Everyone –  students, teachers and parents – are caught up in the moment. The Top Kidz concerts have become a tradition and a highly anticipated event in the academy’s social calendar.

Integrating performance into the curricula allows students in the academy to learn control and focus on their instrument playing.  At the same time, students are encouraged to articulate their thoughts and feelings about the piece of music. In Jason’s first concert, he wore a tux and played ‘Twinkle, Twinkle Little Star’. Many weeks of guidance and support paid off when Jason walked on stage to introduce himself and to tell the audience how happy he felt playing the piece. His performance wowed the crowed and attracted media attention. Click here to read the story.

Stage fright, nerves, and concert anxiety are normal. But with the right guidance, motivation, and encouragement, even the shiest student in the academy will have the courage to perform. When it’s over, there is a huge sense of satisfaction and a massive dose of self-confidence. A demanding environment like a concert builds character especially if it’s done in a fun and non-threatening manner. 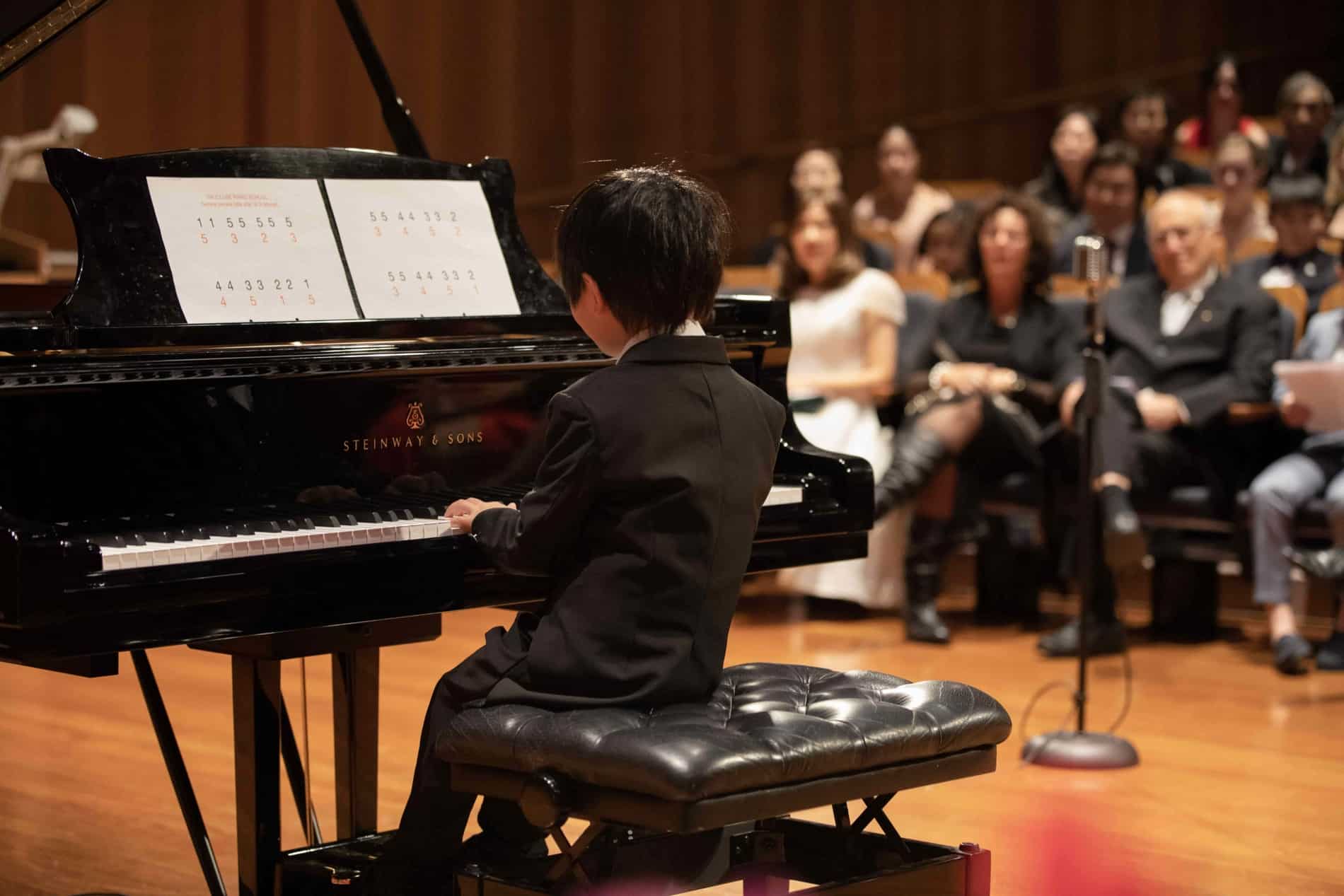 At the end of the day, many parents who send their children to music lessons know that not all of them will grow up to pursue a career in music. In a music education, the child learns discipline, focus and concentration. Showcase activities like concerts build confidence. The child learns how to be tolerant and how to be in control. Exposing them to a concert experience is a good way to help children understand that they can be responsible for their individual success. These are the attributes that will help the child succeed in life – whether they eventually embrace the path of music or not.

Fast forward a year. To a new reality where children learn in front of a computer and concerts are banned under strict social distancing laws. Some parents are hesitant to enrol their kids in an online class. Naturally, they worry that an online medium will not be able to capture the nuances of music. The reality is that technology today is sophisticated and many of the finer points of studying music (for example finger movement, posture and so forth) can actually be captured on camera and audio.

Tina- Jason’s mum – was hesitant at first when Top Kidz launched its online music school so students do not have to halt their lessons. When she discovered what Jason did on Zoom, she changed her mind and quickly dropped a note to thank the teachers at the music academy.

Top Kidz was quick to respond to the coronavirus lockdown by successfully transitioning from traditional classrooms to uber modern online mediums. As a result, we were able to continue with classes and of course, the much-loved concerts. The academy’s concert continues online with many dialing in to its live streams, sometimes from different corners of the world including China, Hong Kong Canada, France, India, UAE and the US.

Since the lockdown began two months ago, Top Kidz has run 10 online concerts. The concerts connect students and parents with their teachers and peers. Even grandparents dial in during the live streams. Jason has performed 3 major classical pieces during this time. And, he did it online.

Watch Jason and other Top Kidz students perform in our online concerts on our Facebook page here.

We love to hear from you!

Please drop us a line if you would like us to feature particular topics in music that you think will be of interest to others.